Just because you say it 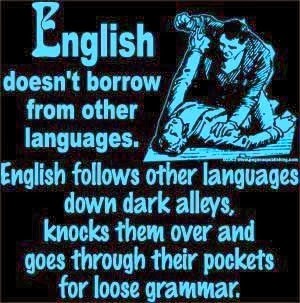 How come, you might ask, that sometimes only a word is everything because you say it?

Certainly there isn’t just one answer to the question. I remember having many such incidents and in one particular was also about having the need for hiding our excitement in a class when i asked a classmate a question about my curiosity toward some lines on the book "A Nation Too Good To Lose" and when he showed an elevated excitement for it and decided to purchase the book just for that lines written by Joe Clark, former Prime Minister of Canada.  Just as how those two lines attracted my classmate to make the decision to purchase the whole book, to me too, it was just the book title and author’s popularity at that time (in the mid-90s) what motivated me to do the read.

It is then not about a word but how it is brought into a concept persuasively beyond our formal linguistics patterns. Another occasion about which i like to recall is a spoken phrase ‘all the presidents have beautiful wives’. It didn’t take me more than seconds to make the conclusion that it was not that of suspicious pragmatism about my little little social encounters in the past but actually was about the spouses of  Canadian prime ministers. Then it also read like, while my mind was getting the list and tried to put together the concept during conversation, that it was actually true that all those spouses mentioned at that time were picture women. Then it is also to say that a single word may or may not have such a power of semanticism or pragmaticism for a considerable persuasive thought unless a word is in a phrase.

American Dialect Society's recognition of ‘because’ as 'word of the year', however, has sparked a number of intriguing linguistic or linguistics arguments. To this, as stated in my previous post, it is my schedule again to read issues that you have been discussing lately and to do some writing for the purpose of some exercise to me and for the interests of worldwide LangLing readers. There have been a few interesting issues and one in particular has often been the take that the conventional definitions be not enough to make its whole.

The www.thefreedictionary.com is always the best source of the reference work available to public for this sort if we want to begin with something for accuracy. And for this reason, i do need to write an apology to those readers of my posts for not mentioning this first before making any contradicting reviews as i did in my previous posts. Certainly, or at least to me, www.thefreedictiobnry.com is the greatest work in the digital print media today. And any of my input for this dictionary and for any other publications are just an added opinion to those who are very much into this business of education but having all sorts of opinions, analyses, researches, writings, etc, etc.

If i look at the issues that you have been talking about for a month now on the mainstream linguistics journals, language journals, blogs, etc. and if i want to provide any opinion, what comes to think of is the word ‘because’ since many of you still have serious disagreements among each other about it. If you have nothing much been told about it or cannot recall some of your school grammar, you may find this as something simple to understand, or vice versa in the sense of your being as if in the state of a bit having been puzzled for it in any other case other than the previous one. And if i look at some of you who have been active in various situations of this sort, i see some of you as just more than active like with the for lifelong love and commitment for such langling issues but having at the same time also some sort of hesitation too to hang on to discuss about it.

My opinion, however, is that a simple agreement can still be made from our conventional implications. Because it is either undeserved or rests upon only on a coordination, the conjunctive element can usually be extracted from a context either as ‘since +’ or ‘as of +’, namely, the subordination or prepositional element respectively. But at the same time, the ‘because of’ doesn't neither seem to belong to our traditional convention nor is properly categorized now for an alternative. Then the question is also how it should be classified if it isn't in the subordinating conjunction class. If we look at some of the corpus models of because, because of seems more economical on the side of the preposition classification for the reason that it compounds with the preposition particle ‘of’ and provides the adverbial complement to all sorts of its predicator just as a prepositional phrase would with its noun phrase object without the need for a *ComP/CC (or if it takes CC, the CC still bears the superficial resemblance to its counterpart but actually remains as the relative/apposition clause to the object of the preposition 'because of'); while a bare because remains on the subordinating conjunction classification for the reason that it always provides the clausal coms only to its matrix. At the same time what else can be agreed or not agreed with this dilemma from each other is that the embedding nature of a noun phrase in which each differs, namely, it is the object of the preposition for 'of--because of' while it is the subject of the embedding clause in question for 'because'.

In addition, i did an overlook on the ‘Analyzing Grammar –by Paul Kroeger’ about this, and this is a remark from Kroeger:

This fact needs to be emphasized because it is a common source of confusion for beginning Linguists. It is rare to find restrictions on the external Grammatical Relation of the NP which contains the relative clause… A particularly interesting type of recursion arises when one clause (category S) is embedded inside another. This ls a major focus of study for syntacticians. Over the past forty years a huge amount of research has been devoted to understanding the grammatical properties of such structures, and it would obviously be impossible to review all of this research in a single chapter, or even in a whole book.

There is some more classical literature on this, but this is already a page for a word and the subject. My next post: March 02
By: LangLing