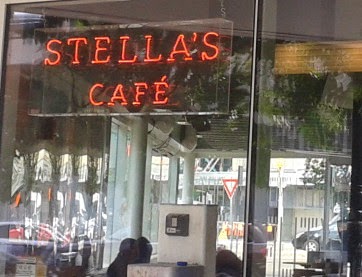 Unlike a traditional breakfast, my day starts simply, of course with coffee and certainly with LangLing blog. Then I usually go for gym for an hour or so to make the day plan. If I don't have a work plan for the day, I head to my library in Howard, a state of the art research library with the all modern facilities for researchers. Due to some moderation plans, however, I had to pack everything and put them in a storage. So I am sort of out of town in these days, but if I am in town, I usually go to University of Winnipeg or public library to get the internet access. Now I have been here a few times in the last 2 months since my graduation 1997 and am in the the library now to write this post. Something got my attention as i walked to the uni library for the purpose of writing a post to LL today was the é on the sign of the newly built university cafeteria.

How do you do if you are to your café?

Personally, I don't think we need any special orientation to it. But if you type the word  café, most word programs will throw the acute diacritic mark with the e these days. If they fail to do the acute mark, you can still do it by 'pressing  Ctrl+ apostrophe first and then E for é or Shift+E for É if you rally want to type that way. If they still fail to insert it in an html browser, you may have to use the decimal code to get around with the problem. Sometimes you may  need the hex number, instead of the deci 769, which you can convert with the basic math or economics or by using online conversion table.

The question is, however, if we really need the accent mark and if  we have any accent at all if so. With all due respects, our orthography (here the alphabets in question) is free from diacritics, for having certain vowel rules and stress patterns. And by convention, 1) the 'e' that ends a word is always silent except in some loan words, 2) the letter <c> makes two sounds (the /k/ sound and the /s/ sound), 3) the sound of letter <c> is controlled by the letter following it, and 4) when <c> is followed by a consonant (except h), it makes the /k/ sound or when followed by the vowels <a, o, or u>, it also makes the /k/ sound.

And, we have generally good idea that there is more letter sounds than there are letters in the alphabet and we know that dictionaries use diacritical marks just for that reason, to indicate which phoneme to give to a grapheme; that is, which sound to give to a letter unit.

Fine, but I am not sure if we really need that extra--yes, it isn't <keif>.
By: LangLing