It is then after all the nasal consonant <n> to blame for, if you don’t like it. 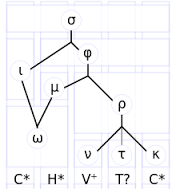 Yet another way of putting it is, at least for the English descriptive grammar in some aspects and that also for the salient cause that perpetuates a tilde on the top of the vowel <i> in the environment <-in-> as stated above, that there are minimal pairs in English (see also in different context here) that differ only in that where one member of the pair has the oral version of a vowel whereas the other member of the pair has the nasalized version of the same vowel (neither a distinct phone nor phoneme in their contrastive orthography).

The environment in which the contrastive variation occurs is then described simply as:

But what is of greater interest here, however, is that the more linguists and students in English or linguistics examine the phonologies of languages, the more they find that similar phonological redundancy rules being applied to the simple general classes of sounds like nasals and vowels in their assimilation be in the state of inconsistent to their very discipline, in a way of making things very difficult for comprehension during the whole study period.

So, were did Anna (a differently abled but not necessarily linguistically challenged person by birth who loves to write a language blog while attending her high school but did successfully write a very good post on Christmas the other day, even just by googling) get the idea to write her name as Ãnna instead of Anna and her place of country as Ãmerica instead of America in her social media website that sounds very intriguing?

Then, it seems to be of someone behind an advocacy group for things that are of neither to be rejected nor to be accepted easily by the way of their reasonable propositions.

It would be a too simple explanation certainly if we are to color the contrasting elements differently as if they were to explain to children for saying why the initial vowel <A> sound isn’t a different phoneme to an emphasis as in Anna or America but to a name like Tom and yet still only to emphasize as an allophone on the latter.

Such an approach, however, could only serve as an insult to the academia world since more interesting language phenomena are here generally to discover from looking into the general rules of a language such as the phonemic rules discussed for its descriptive grammar on the oral and nasal vowels assimilation in English syllables.

Yet, in some aspects, it seem still possible at the same time to make the contrasts Anna or America in nasal vowels for a viable hypothesis, also in English, since the similar rules also apply to the same classes of sounds across languages is not surprising because, as they are sonorants, such rules often have phonetic explanations for their natural assimilation processes.

See, Anna is far ahead.
By: LangLing