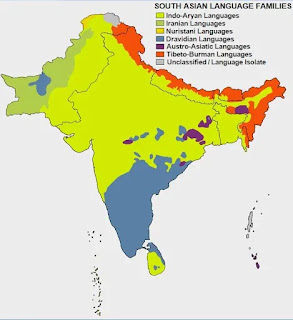 Looking at some of the issues in literacy Tamil of Sri Lankan Tamil or Indian Tamil for the comparison with English to the similarity and else, this has come to be noticed with a number of problems in our educated population for the formal writings. Here bellow you can see my comments with the font in blue and the rests in black. I cannot quote the exact forms of the texts i selected for comments as these are selected from various publications for a review. You can certainly copy and paste an item(s) needed and search for the exact print(s) for the accuracy.
Author #1: Tamil is one of 22 official languages in India, and the fifth most widely spoken language in the country. It's used by more than 60 million Indians. "It has so many problems," says Mr. Ramakrishnan in Chennai, "Problems in terms of meaning, problems in terms of forms of a word. problems in terms of syntax," says Ramakrishnan,  a man on a mission: to standardize modern Tamil. "We don't have a comprehensive grammar of modern Tamil. The last grammar was written in the 12th century," he says. That's not to say Tamil is an endangered language. All those millions of people aren't going to suddenly stop speaking Tamil anytime soon. Still, it is struggling. Written Tamil is different to the spoken Tamil people use every day. Ask someone to try and they'll respond, "'Oh no, I can't write Tamil'," says Ramakrishnan. The reason he says this is because subconsciously he thinks if he writes it should conform to the classical standards." Sadanand Menon is a well-known writer in Chennai. He argues that Tamil has become lost in a sense of nostalgia which does not enable it to be a modern language. Menon says that after the British left India, local politicians used the centuries-old classical Tamil of epics and royalty to define a proud regional identity. Since then politics has moved on. But day-to-day Tamil hasn't. Arguably it took the building of a nation to produce such a radical shift. Ramakrishnan worries that people in Tamil Nadu—especially the poorly educated—know neither English nor Tamil very well, and get by only with a limited mash-up of the two. He says you can't even give directions to a local cab driver without using English. "So today if I tell my driver 'turn right' in Tamil, he will not understand. I must use the words 'right', 'left' and 'straight'," he says. The general standard of written Tamil isn't very high. And so, in purely economic terms, its value is limited. The language can't take your business around the world, like English, or even across India like Hindi. To do that, Ramakrishnan says, Tamil needs clarity and consistency. "We don't have a grammar, we don't have a thesaurus, we don't have a good English-Tamil dictionary. Along with the challenge of English, the Tamil spoken in India has to contend with, say, how the language is used in Sri Lanka.” But as Ramakrishnan ticks off elements of Tamil grammar, it's hard to argue that a few rules along the way can help.

Nevill Fernando: I have no comment in this except for saying that any school of thought by which the principles of syntax are governed appear to be difficult to know in the writings of our educated people for formal Tamil. Then, Ramakrishnan is maybe correct for the reason as to why.

Demonstrative deixis in Tamil contrasts two degrees of distance in space and time: proximal i-, said to reserved for referents close to the speaker, and non-proximal a-, which can used to refer either to remote referents or to referents whose distance from the speaker is unspecified or irrelevant.

Nevill Fernando: In most cases they are. However, cf. ‘each and everyone’ in the context of the anaphora. They are indeed demonstrative, yet the antecedent to determine the distance contrast but not to the anaphor, ie. the 3rd way of the distance contrast in Tamil is the distance-covert; governed by a-, e-, and o- in proximity to which the other morph paradigm is only yet irrelevant. For example:

About 100 students is in the class room, and each is having laptop on the table

Such a case, for an example, raises the issue of the diachronic change with the semantical meaning over the time for the pronominal referent, rather for 'being pronominaly expressed', and ultimately rejecting our hypothesis that we initially hold otherwise as if it weren't so.

And given such a circumstance by which one could only be surprised with our hypotheses as if it were a story world rather than a real world, our literacy intake can too lead us to think that the proximity contrast in such a case can neither be proximal nor distal but subjective at most to the narrator salient rather than rampant at its essence physical.

And as the issue is the classifying scheme by which one wants to develop the hypothesis for a sound theory, and also as demonstrative deixis is the demo-det and demo-pro in the convention, it is thus not that all demo pronouns are to be encoded in demo personal pronoun; same as in English.

Nevill Fernando: Relevant for demo in some contexts except as stated above and not relevant in other contexts as the deixis in Tamil PP is much so linked to the orientation; hence demonstrative.

Author #5: Every 3rd person pronominal reference forces a choice between ‘i’ and ‘a’

Nevill Fernando: Not relevant; cf. ‘Anything about them is worthy of knowing‘ versus ‘Anything of money saving advice is worthy of consideration’. Yes to the first example but not the second and yet the first has nothing to do with our hypothesis, and so it is in fact an accidental gap which encoded as if it were correct. They on the other hand are by and large, say, relevant, since as a speaker orientation  in Tamil language has to do with the much owe for a demonstrative speech.

Author #6: Tamil lacks deictically neutral definite articles but uses demonstrative determiners inta to 'this' and anta to 'that' to signal identifiable referents.

Nevill Fernando: Relevant only in terms of indexing thematic referents for the demarcation of  determiners.