The grammar of 'be born' 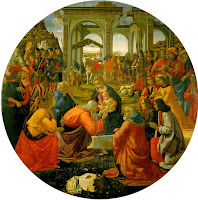 Arriving December is special month to the western world, and also to the rest at least to a some extent. So nor is it fair or neither we do to mention nothing emphasizing with the special month. The picture shown: by Domenico Ghirlandaio. Good to take the concept of 'be born passive' for descriptive grammar. I had a note for a while ago now to write a post on this, so there must have been similar appeared to have been relevant with the same. But that should be even finer if so.

While saying that activity of philosophizing is essentially analyses, as we have seen how and read what earlier from some good philosophical books, we are also maintaining that all those who are commonly called philosophers have been or are actively engaged in carrying out syntactic analyses. On the contrary, we are also at not ease to show that a great deal of what is commonly called philosophy is metaphysical in character and hence this is, we can say, more than metaphysics.

Here we have dispute in our speculative grammar with 'be born' as to if it comes into construction to the language voice of the active or passive and why many goes for passive. I think the passive submission as to retroactive effect is a bit absurd. I do not think it is accurate to speak of present state of person in past passive in its effect that way.  If we were to say, for example, 'The building is closed’, that would be present retroactive adjective and not passive, so there is nothing of that passive kind in our submission. If we were to take ‘be born’ in the same to refer people birth date, that type of copulative legislation is past retroactive.

However, there is still one objection to be met before we can claim to have justified our view that all synthetic propositions are empirical hypotheses anyway. Such a claim is, i think, erroneous in itself and contradictory to others while all genuine propositions are rather empirical knowledges and so they are not empirical hypotheses. This is thus one of those misunderstood concept within the field of philosophy and particularly among philosophy writers. Secondly, this objection is based on the common supposition that our empirical knowledge (rather than speculative knowledge) in this is of two different kinds that which relates to questions of empirical facts and which relates to questions of value.  It is thus seeking to be so that the statement of value in this types are genuine synthetic proposition but they cannot with any show of justice be represented as hypotheses which are used to predict any other sensations; and, accordingly, that the retroactive counterpart (the adjective, and any of its respective complement) as branches of speculative philosophy and theology in this presents an objection to our radical empiricist thesis in some sense.

Accordingly, also linguistically, just to distinguish some pattern match with the semantic point of view from a number of samples contains ‘born’, with the aim of characterizing object and predicative complement from those samples, and then to turn to a consideration by which they are syntactically meaningful, the reliability between semantic and syntactic structure is more strait forward in transformational grammar for S-P-O use than S-P-PC. However, it is not the answer as to why we should consider that ‘born’ always comes to be in construction with the passive voice as we are commonly told in descriptive grammar.

Moreover, also with the alternative explanation that since the arguments are expressed by NPs while the semantic predicates are expressed by Vs, we may consider the proposition in abstraction from the thematic specification, namely, 'experiencer' rather than 'patient', it is still not that the satisfactory answer.

So does ‘born’ ever come into construction with the passive voice as we are commonly told?

The contention is the version by which we are accustomed is not that the passive-voice counterpart, however, though many other forms of the same 'be born' does the passive-voice in many cases. For example, a question like 'Were you born by an aristocrat family in Bristol, Heather?' is in the passive-voice from of a different kind, or even a pure form of a sort.

In comparison thus as in 'Heather was born in Bristol', the submission is that the event time has retroactive force in its effect for subject complement only as an active-voice, and, accordingly, which is governed by a lexical morphology rather than as in the first example which is governed arguably by an inflectional morphology.

So a further question is if it isn't that passive-form if we were to say something like, for example, 'I was born in a power family in England'. A good answer would be, i would argue, that 'yes' can be only applied to in its minimalism for this kind, ie, in a pseudo or for a pseudo-passive form. Yet at the same time what a pseudo from attributed in this is has to do more with our descriptive grammar than an explanation of pseudo-passive form.

Thus, the ordinary system of 'class' here, as elaborated in the works of ethical philosophers, is very far from being a homogeneous whole. Not only is 'be born' apt to contains piece of morphological disputes, and analysis of a non-identical class, but its actual lexemes are themselves of very different kinds. The distinctions between lexical and inflectional stem system only is thus to yield the division of certitude in this, while lexical morphology deals with the process whereby non-simple lexical stems are formed, and controversially, inflectional morphology deals with the process whereby the forms of a lexeme are derived from the lexical stem.

Moreover, for the better in detail, the crucial differences between the two types of class process lies in their significance for the syntactic classification of words. Thus, as a first and very close approximation, we can say that words with a given inflectional property make up the syntactic class is not there as we have understood but the word derived by a particular lexical process is to be referred to and so is a different kind.

Accordingly, more often than not passive-voice is used when there is even no such passive implication, as in, say, 'I was born in a power family in England', since the morphology is to include rules for deriving the varieties of inflection forms of lexeme only from the 'lexical stem' in this, while the syntax is to include rules specifying under which condition a lexeme may or must carry a given lexeme.

However, many, or rather almost all, our grammar books appears to be having no objection to provide with the take how the word 'born' should be applied in the grammatical voice as to if this should still at best be in passive-voice. There appears to be still issues among writers for how the grammar is to have traditionally been understood or how the alternative active-voice is to be even  meaningful.

(Note: The answer is certainly simple and it is just for 2 or 3 sentences.  This post is written with my interest in academic publications and research interests with PhD students on certain concepts. Thus, those with no undergraduate educational background in philosophy, theology, or socials-sciences like politics may find it with much ease to read and comprehend than those with postgraduate educational level with those subject areas. So i think just coping and pasting certain paragraph of interest in web search may give similar texts for distinguishing the differences and corrections made in this as for finding the reason why to those advance readers for the better.)
By: Nevill Fernando